An Evolving Form of Interactive Storytelling

Despite numerous obstacles, many two-spirit and/or gay/bisexual HIV-positive Aboriginal men (APHAs) who have been living with HIV for a long time report that they are doing well. The University of Toronto in partnership with the Canadian Institutes of Health Research (CIHR) and the Canadian Aboriginal AIDS Network launched an independent study into some of the permeating factors that allowed Aboriginal HIV-positive men to remain resilient and continue on with their lives after being diagnosed with HIV/AIDS more than a decade ago. This study, named the 2-Spirit HIV/AIDS Wellness and Longevity Study (2SHAWLS), would form the basis of one of the most compelling stories on human endurance and on coping with the impact of a disease carrying such a heavy stigma in today’s society.

This study was designed to bring together a team of researchers comprised of Aboriginal and non-Aboriginal community members and academics to examine the ways in which two-spirit men with HIV understand the skills, resources, knowledge and practices that contribute to their health and well-being. Aboriginal males, aged 30-50 living in Ontario, who had been diagnosed HIV-positive, were invited to participate in this comprehensive study, documenting the challenges and circumstances of their lives following their diagnosis. This involved a 3-day working format, followed by a series of breakout groups and one-on-one interview sessions.

Coming out of this study, a large database of over 7,152 peer-reviewed article abstracts was formed. These personal stories and poignant testimonies would form the foundation of a resiliency strategy. This in turn would become the basis of an innovative resource which would showcase the use of leading-edge visualization techniques – mapping out large data constructs with elegant web-based user interfaces.

The premise was to use the metaphor of the traditional Medicine Wheel – a symbol widely embraced in traditional Aboriginal medicine, to portray balance, healing and wellness, as well as direction (a compass with its cardinal points). This Medicine Wheel would form the blueprint that would then be used to map out all the data findings of the study.

The lengthy process involved combing through the many personal testimonies, looking for patterns in syntax – words that were being used by respondents in multiple instances (such as “my family” or “my community”). These were then aggregated into code code keys that were similar to one another (i.e., “my village” and “my reserve” became “Community”). Over time, these code keys became the basis of each ring, segment, and quadrant making up the shape of the Medicine Wheel.

The Medicine Wheel diagram in its infancy

As this process continued, it slowly became apparent that a number of key catalysts had influenced the respondent’s experiences over this 10-year period; intangible forces that they had called upon to help them through the struggles and challenges so unique to their condition. These slowly started taking form, becoming the 7-Truths of Resiliency; these being:

Once these 7-Truths had been actualized, the task of visualizing them into an interactive, engaging medium began. Each of the 7-Thruths needed to have its own unique metaphor and symbolism, but also needed to exist within a shared universe that had been created to house the Medicine Wheel diagram. These Truths would act like small “constellations” floating in the night sky, independent, yet all part of the expansive vista above, each containing all the data points (individual respondent testimonial stories) that had been associated to that Truth.

Adapting this “Planetary Constellation” version of the Medicine Wheel into a responsive browser-based resource (without the use of Flash software) that could be supported by a variety of platforms (desktop, mobile, tablet) would become the next challenge. How do you map out 1,380 data points into a user-friendly, engaging tool that would provide users with multiple ways of cross referencing information? Our solution was to create a layered approach – like an onion, viewers could peel back various segments of the Medicine Wheel, zooming in and out to reveal more relevant stories as they drilled down deeper into the experience. 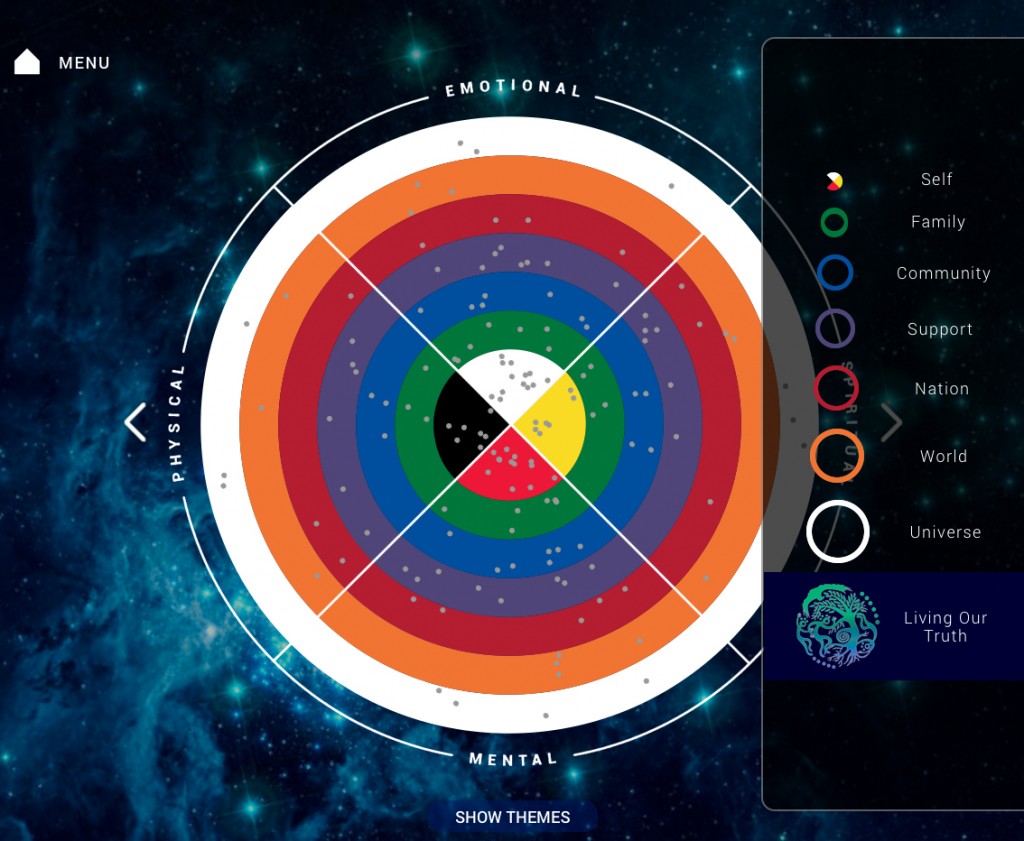 The end result is an immersive online resource that tells the poignant stories of how these HIV-positive Aboriginal men were able to find their inner strength, cope with their diagnosis and adapt to become resilient. The stories they’ve shared and the experiences they’ve endured have been brought into this engaging user experience.

This presentation has since been showcased at the 2014 HIV/AIDS World Conference in Melbourne Australia to resounding applause!

We invite you to explore this online resource for yourself: