Lesbian, gay, bisexual, trans, queer and questioning (LGBTQ) youth are at significantly greater risk of suicide than their heterosexual and cisgender peers: 33% of LGBTQ youth have attempted suicide in comparison to 7% of youth in general, and 47% of trans youth have thought about suicide in the past year alone.

In the hopes of raising awareness and working with regional community leaders to develop evidence based recommendations, Egale Canada Human Rights Trust organized an international summit on LGBTQ Youth Suicide Prevention in 2012. This gathering, would feature health-care representatives, mental health specialists, federal and provincial legislators, educators and community suicide prevention workers coming together in a 3-day workshop forum. A number of breakout working groups and plenary sessions would allow academics and policy makers an opportunity to actively engage with frontline workers and knowledge-share in attempt to construct a framework of 20 evidence-based recommendations for ending LGBTQ youth suicide. These 20 recommendations would then form the basis for a comprehensive four-step implementation plan, which could be immediately put in place at the community level.

This summit represents a significant step toward ending the tragic and entirely unnecessary loss of so many precious lives. Today, we call on all levels of government to implement these recommendations as part of a critically needed national action plan to end youth suicide. – Helen Kennedy, Executive Director of ECHRT

The 2014 international Summit was  a “hands-on” event guided by facilitators who had experience in translating knowledge and ideas into action. The Summit resulted in the development of four comprehensive implementation plans pertaining to the recommendations from the first LGBTQ Youth Suicide Prevention Summit: 1) Schools, Education, and Training; 2) Public Awareness; Community Involvement and Accountability; 3) Research and Evaluation; and 4) Resource Development. 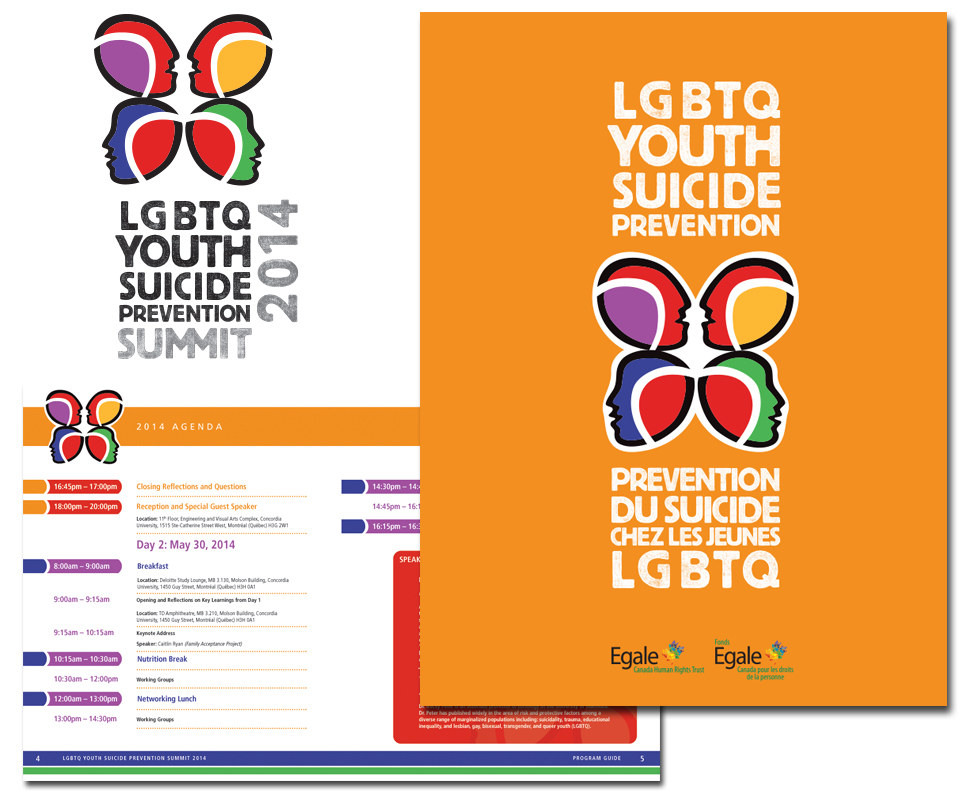 Working in conjunction with Egale, EarthLore Communications developed a vibrant, colourful brand, which would become the symbol for LGBTQ Suicide Crisis Prevention. This identity was developed to inspire and motivate the summit attendees with a positive, more inclusive vision – in contrast to many of the national campaigns on suicide prevention which had been developed in the past, which were “dark” and oppressive in nature.

From the start, we made it clear that our approach wasn’t going to be one of Shock and Awe, seen in so many of today’s mainstream campaigns that use fear and intimidation as their means to drive home the message. – Sid Lee, Creative Director

The use of the Butterfly as the primary metaphor was initially rejected as being too fragile and vulnerable to be appropriate for such a harsh subject matter as LGBTQ youth suicide, but after some back and forth discussions, it was agreed, that this small delicate creature was actually a perfect symbol for resilience and endurance. It also was ideally suited to convey a sense of change and metamorphosis. Produced featuring a rainbow of colours, this graphic reinforced the theme of diversity and acceptance, while also depicting a “meeting of minds” coming together to share and exchange ideas.